It all started January 19, 1869, when Fenton's town hall burned down. Destroyed was the Perry residence on Caroline Street, behind town hall. The A.P. Davis dwelling, which did not burn, but was torn down to prevent fire from spreading. Dexter Horton's 2-story wooden building, on the southeast corner of Caroline and Leroy Street, and the town hall building adjoining on the South, owned at the time by A.P. Davis.

The town hall building was 3 stories with a saloon and billiard room in the basement, where the fire broke out at 10 pm. The first floor was occupied by Rhodes and Curtis jewelry and bookstore, the post office, the Ladies' Library, law offices of A.P. Davis, WP. Guest and J.L. Topping and office of M. Ayres. The town hall was on the second floor and was also used by the Fenton Amateur Dramatic Association. The third floor was the Masons' lodge room.

Soon after this fire, a fire committee was instructed to report a plan for fire organization. By December 1872, nothing had yet been planned for fires. Village president EM. Hovey appointed Robert Deming and John O'Hare to serve on a committee to find a way to extinguish fires.

In January 1874, there was another fire. The Andrews House was partially destroyed. This was a hotel on the north side of West Shiawassee, one door west of the Leroy Street corner. Citizens used pails of water to put the fire out, but EM. Adams assisted with a Babcock fire extinguisher. This extinguisher was quite impressive, and early that fall an agent for the Champion Fire Extinguisher Company came to town and gave a demonstration. This demonstration impressed the village council and they immediately ordered 6 extinguishers. 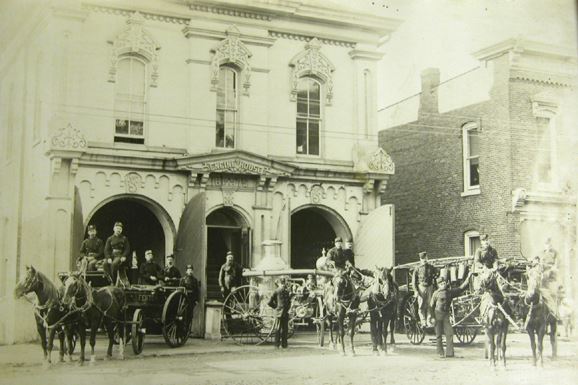 Soon the village purchased fire buckets and 4 hooks and ladders. They now needed something to carry the new equipment. Cole and Kimball carriage shop, on the west side of Leroy Street facing Ellen Street, built a 20-foot-long hook and ladder truck. This was designed to carry 4 fire extinguishers (nobody knows what happened to the other 2), hooks and ladders, rubber pails, axes, rope, etc.

Now the village needed a fire department: a group of men willing, able and dependable to answer the call of fire. A total of 37 men volunteered. A week later, 16 more men presented their names. The following list is of the officers and members of Fenton's first official fire department. This list is typed exactly as it appeared in the by-laws manual of the Fenton Hook and Ladder Co. Number 1. This manual indicates that Fenton Hook and Ladder Co. Number 1 was organized March 9, 1875. 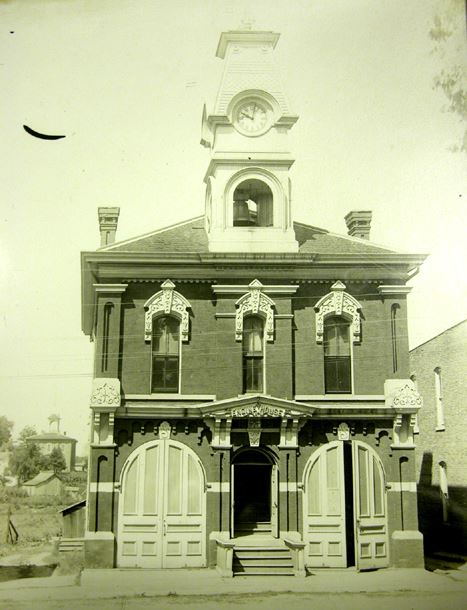 The Hook and Ladder Co. now needed a place to store the fire equipment, so the village council appointed a committee to investigate. They decided a new building was the only solution and it would also house the village council rooms. The site chosen was on the west side of South Leroy Street in front of where the Community Center now stands. Ground was broken for the new engine house at the end of June 1875. On New Year's Day 1876, the American flag was raised to the top of the new engine house for the first time. A dedication took place several weeks later. The bell to call the firemen to fires was not received and installed until September 1876. During 1876, the clock and bell were installed in the bell tower.

The firemen wrote up a set of by-laws and a constitution, by which they were to govern themselves and they would elect their own officers. Today this has changed: the appointing of a Fire Chief is done by the City Manager and approved by the City Council. The Fire Chief appoints the officers of the department. In the late 1990s, the firefighters officially stopped voting for the officers of the department and turned over that responsibility to the Fire Chief.

In early 1879 the village council bought 4 rubber coats, 4 hats and 2 kerosene lanterns. They now felt that Fenton's Fire Department was complete, but they would soon find out otherwise.

In May 1879, a Silsby Steam Fire Engine, 2 hose carts, one combined hose and engine heater and 1000 feet of fire hose was purchased. The village took delivery of their new steam engine in June 1879. Named the "City of Fenton," the steam engine was a 3rd class engine, meaning it was the 3rd size made by the Silsby Manufacturing Company of Seneca Falls, New York. Nickel-plated throughout, with the latest improvements, this engine had a tongue and a drag rope so it could be drawn either by hand or by a team of horses. It was considered the ultimate in fire-fighting equipment for towns the size of Fenton and cost $3,200.

This purchase came about due to the April 24, 1879 fire that destroyed a significant amount of Fenton, including the following: cooper shop, sawmill, apple drying establishment, woolen mill, barn, grocery store, store building next to the Leroy Street bridge and the Leroy Street bridge itself. This fire was in the area from the East Street bridge, west to Leroy Street. The fire danger was so high to the rest of the town that Owosso and Pontiac were telegraphed to send their steam fire engines. Owosso arrived promptly aboard a special summoned train to help. Pontiac was canceled after the fire was brought under control.